Holly was featured as one of the Super Women 2016 in Albuquerque The Magazine this October! 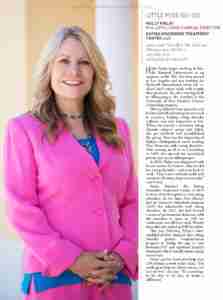 Holly Finlay began working at Sandia National Laboratories as an engineer in the ‘80s. She later moved to Los Angeles and was working for Rockwell International when she realized she’d rather work with people than products.  So, after moving back to Albuquerque, she enrolled in the University of New Mexico Clinical Counseling program.

Having suffered from anorexia and bulimia herself and taking her own road to recovery, helping eating disorder sufferers was very important to her. When she learned a university eating disorder support group had failed, she got involved and reestablished the group. That was the beginning of Finlay’s distinguished career treating New Mexicans with eating disorders. After earning an MA in Counseling in 1992, she opened her specialized private practice in Albuquerque.

In 2010, Finlay was diagnosed with breast cancer. She beat it—like she did her eating disorder—and went back to work. “I had a new outlook on life and wanted to do more, help more people,” says Finlay.

Finlay founded the Eating Disorders Treatment Center in 2011 to train other therapists to treat eating disorders. At the time, New Mexico had no intensive outpatient program (IOP) for adolescents with eating disorders. By 2012, she had formed a team of professional clinicians with the expertise to open an IOP for adolescents and fill that need. Shortly thereafter, she added an IOP for adults.

This past February, Finlay’s clinic established New Mexico’s first eating disorder partial hospitalization program to bridge the gap in care between IOP and inpatient hospital treatment, which usually means going out of state.

Finlay and her team now help over 150 patients a week at her clinic. “I’m working to help my clients thrive, not just survive,” she says. “It’s a privilege to be able to do this, to make a difference.”