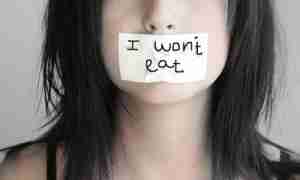 Anorexia nervosa is an extreme fear of gaining weight or becoming overweight, even after becoming underweight. People suffering from anorexia nervosa are unable to view their own bodies accurately, often seeing themselves as overweight or “big” even when they have become visibly emaciated. Women eventually lose their menstrual cycles, which contributes to the long list of health problems that they experience due to starvation. Often, it is assumed that people with anorexia “just don’t eat”, but many people with anorexia simply restrict their intake below what their body needs over an extended amount of time. A person with anorexia might appear to eat normally at times by carefully eating meals with others and restricting food intake when alone.

No single treatment modality has been proven effective in treating anorexia nervosa. A team approach is essential in treating all eating disorders because they involve both psychological and physiological components. Psychotherapy, nutritional guidance, medical care, and sometimes medication are all components of treatment. Thus, a treatment team requires a therapist, a dietician, a physician, and sometimes a psychiatrist. Family-based treatment is often recommended in treating an adolescent with anorexia nervosa, but it is not always effective, and family dynamics must be considered before beginning this treatment modality.